Time to make your own moves! Get started on your journey!

Mirror Mirage; a glimpse of the body image issue & media

​Now, we try fad diet after diet and exercise ourselves into the shape we are dying to resemble- hoping to achieve the body or beauty that we idealize – often with serious consequences. Even though, we’re like our ancestors before us in the sense that we are concerned about appearance and beauty, but there is a difference. Modern technology and the popularity of the mass media have caused our seemingly normal concerns about how we look to become obsessions, sometimes life-consuming.

The body type portrayed in advertising as the ideal is possessed naturally by only 5% of American females according to the National Association of Anorexia Nervosa & Associated Disorders. The average height and weight of women varies around the world, but in the United States in 2010 the average adult female height was 63.8 inches -- approximately 5-foot-4 -- and 166.2 pounds, according to the Centers for Disease Control and Prevention. This number is higher than in the past and corresponds to a body mass index that is classified as overweight.

Prejudice and “fat-phobia” against the overweight in our society is such that obese people (in particular female) tend to have a very poor body image – not to mention severe anxiety and depression. Studies have shown the mental well being of obese women to be worse than that of the chronically ill or even severely disabled. These problems are not caused by obesity itself – in cultures without fat-phobia or where fat is admired, obese people show no signs of these effects – but by social pressure and the association of beauty with thinness. (Mirror, Mirror) 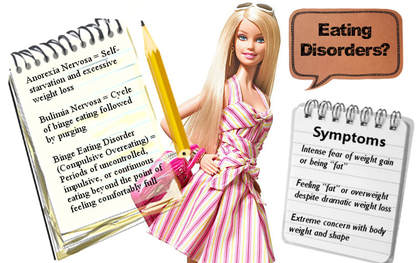 Thanks to the media, we have become accustomed to extremely rigid and uniform standards of beauty. TV, billboards, and magazines mean that we see 'beautiful people' all the time, more often than members of our own family, making exceptional good looks seem real, normal and attainable. Standards of beauty have in fact become harder and harder to attain (pretty much unrealistic), particularly for women. Among women over 18 looking at themselves in the mirror, research indicates that at least 80% are unhappy with what they see. Many will not even be seeing an accurate reflection. Most of us have heard that anorexics see themselves as larger than they really are, but some recent research indicates that this kind of distorted body-image is by no means confined to those suffering from eating disorders – in some studies up to 80% of women over-estimated their size. Increasing numbers of normal, attractive women, with no weight problems or clinical psychological disorders, look at themselves in the mirror and see ugliness and fat. (Mirror, Mirror)

What we already know about the Issue
Research has shown that attractive children are more popular, not only with other students, but with their teachers. These children also receive higher evaluations and are held to higher standards encouraging these students, which improves their performance. Attractive applicants have a better chance of gaining employment and get paid more. One study in the U.S. found that taller men earned approximately $600 more per inch than their shorter executive counterparts. Attractive people are found guilty less often in court and when found guilty; they serve a less severe sentence.

Not only are there effects in every day life, but also in one’s health. In the United States, 20 million women and 10 million men suffer from a clinically significant eating disorder at some time in their life, including anorexia nervosa, bulimia nervosa, binge eating disorder, or an eating disorder not otherwise specified. (EDNOS) For females between fifteen to twenty-four years old who suffer from an eating disorder, the mortality rate associated with the illness is twelve times higher than the death rate of all other causes of death. Our society’s emphasis on appearance and idealization of thinness promotes dangerous dieting behaviors and blinds us to people suffering and in need of treatment. These behaviors are also closely linked to depression and suicide.
​
We, as a society and as media professionals, need to dive further into this topic for a number of ethical and moral reasons. People, particularly women, around the world are all facing the same consequences of society’s representation and acceptance of body image and the lack of portrayal of self-love. Media influence has a large role in molding the masses attitudes and opinions and needs to take responsibility for such power. Its influence effects not only how an individual feels about him or herself, but also how others treat and feel about an individual, a true cultural pressure. This issue affects all races and genders both young and old. It’s not often that an industry, other than the medical field, can save lives, but in this instance, media can. ​